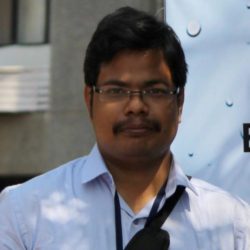 Dr. Ayan Mondal has completed is M.S in Microbiology from University of Calcutta in the year 2009 and conducted his Ph.D graduate research with Dr. Amit Pal at Division of Pathophysiology, National Institute of Cholera and Enteric Diseases (ICMR), Kolkata, India. His PhD thesis was focused on understanding the molecular mechanism of pathogenesis associated with proteases from Vibrio cholerae O1 strains and also studied transport of biologically active proteases through Outer membrane Vesicles to host cells. He has been awarded Ph.D in Microbiology from University of Calcutta in 2017. He was appointed as Research Associate in Division of Molecular Medicine, Bose Institute, Kolkata under DBT-Research Associate Scheme after completion of his Ph.D. He has worked on isolation of small molecules from Indian Medicinal Plant extracts having anticancerous activity.