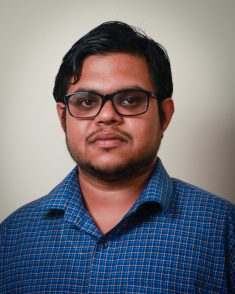 Dipro has done B.Tech. in Biotechnology from VIT University, Vellore in 2013. In 2016, he has completed M.Tech in Biotechnology from VIT University. He has done his M.Tech. project from National Institute of Cholera and Enteric Diseases (ICMR), Kolkata under Dr. Amit Pal in the division of Pathophysiology. This project was on purification of YghJ, a secreted metalloprotease identified previously from neonatal septecemic E.coli isolate and to study its role in exhibiting cytotoxicity and proinflammatory response. Dipro continued as a project trainee under Dr. Pal in NICED. The objective of this project was to identify the cell surface receptor of YghJ and the signalling pathway for the proinflammatory response.